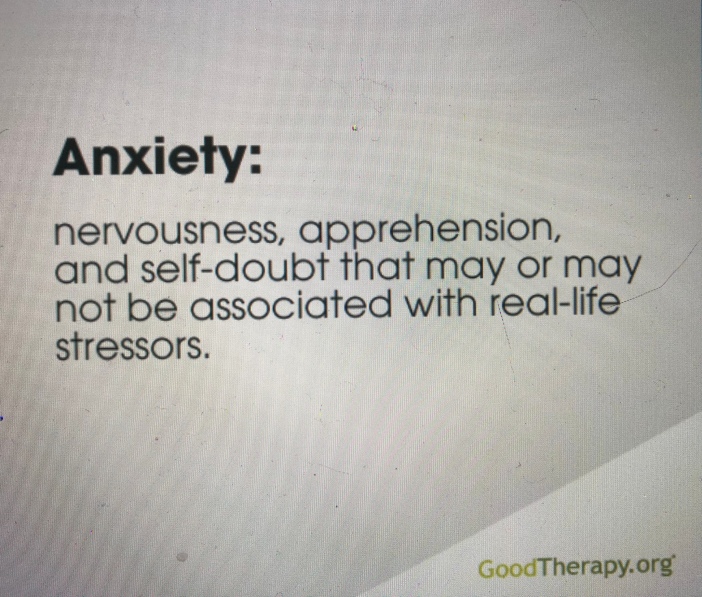 I have always prided myself as someone in touch with their feelings.  I can usually pinpoint the source of my emotions. Frustration with a relationship, disappointment in an outcome, anxiety about a challenge, excitement about an upcoming new experience – I can usually identify what is going on. Lately that ability seems muddled – I’ve had more free-floating anxiety than usual.

I was driving south on the Thruway the other day, heading to New York City for something like the 5thtime in a month (I’m usually excited by the prospect of time in the city). This time I just felt nervous, my brain flitting from one thing to another, I was having a hard time concentrating.  Thankfully I was able to focus on the road – it would truly have been a really bad sign if I got lost. I can make the trip on autopilot at this point. I tried to think through what has been going on, why this unease? Why have I been feeling more overwhelmed than circumstances seem to warrant? Since I was alone in the car, I took the opportunity to try and sort it out.

I am well aware that I am very fortunate, my life is an embarrassment of riches. I try to keep gratitude in the forefront, but, oddly, I find that the more I have, the more I fear losing it. I’m not referring to things (though I do have a confusing relationship with things, I like them more than I should), but to people. Readers of this blog know that our daughter-in-law is expecting a baby any day now. I think humming along in the background of my brain has been an awareness of the risks involved for everyone. I am also well aware of the fact that I have no control over how things will go. If only I could wrap up my loved ones in a cocoon to protect them! Obviously, not an option. So, maybe one contributor to my heightened level of anxiety is anticipation of this big event.

It’s funny in some ways because we spend so much time wishing for things (both tangible things and situations/events) and then when they happen, you realize it isn’t quite what you thought. There are strings attached.

You hope that your child finds a partner in life. But when they do, it changes your relationship (in all sorts of ways, many positive, some unanticipated). You look forward to being a grandparent, but that brings new worries. You look forward to a trip, but then you deal with the aggravation of delayed flights or turbulent weather. You want the luxury of a swimming pool in your backyard, but then you have to deal with the maintenance (a seemingly never-ending source of aggravation in our case). These may seem like wildly different ‘things,’ but there is a theme. There is a cost that comes with the things we want. Perhaps that is obvious, but it makes me stop and think. There is virtue in simplicity. Maybe I should consider Buddhism! The way I understand one of its central tenets is that you shouldn’t become attached to things or ideas – you need to let go of expectations. I don’t know if I can do that.

Or maybe I need to figure out how to not let these things get to me; figure out a way to acknowledge the worry, but then set it aside, especially when there isn’t something to be done.

But, it is so easy to lose perspective. Over the last couple of months, we have been enmeshed in the process of buying a condo in NYC. That’s the reason for so many trips to the city. Filling out the paperwork for a mortgage and shepherding it through the process felt like a full-time job. How blessed am I that making this purchase is even an option? But it is also a source of anxiety. It is a huge investment, the numbers are scary. But then I would remind myself that if it fell through, there was no real loss. And, if we successfully closed on it, and it turned out to be too big a financial commitment, we could sell it. So why did it feel so stressful?

In part, I blame Trump. You may ask, what is the connection? As I was driving down the Thruway, mulling things over, I realized that another large piece of my anxiety came from worries about our country’s future. I happened to be reading a novel, Ready Player One, set in a dystopic future that was all too imaginable to me. I have no faith in Trump, he has appalling judgment and is intent on sowing seeds of hate and fear, and Congress isn’t willing to take him on. The threats of climate change, of civil unrest rooted in the growing divide in this country, of America losing its footing, are all too real. Not to mention the tragedy of gun violence. Making such a huge investment in a time like this feels like a leap of faith, but my faith is shaken.

This unsettled feeling about our future was reinforced by an experience I had on that trip. On the day I was driving, a video went viral of a white guy going on a rant in a New York deli because the employees were speaking Spanish. It is the type of thing that seems to be happening a lot more in this age of Trump and ubiquitous cellphones. One of the reasons I was making the trip was to be at the new apartment for the guy to install cable and wifi. The guy arrived, at the appointed time, and, as is often the case, it took quite a bit longer than expected for him to successfully get things running. He was there for a couple of hours. At one point, while we were waiting for technical support people (he was on hold with his office) to try and fix things on their end, his personal phone rang and he asked me if I minded if he answered it. “If I do, I will be speaking Spanish,” he explained. “Of course you can answer your phone,” I responded. He shrugged sheepishly, as he answered. I moved toward the kitchen to give him space.

As I reflect on this interaction, I realize that I would feel differently if he had been in the middle of explaining something to me, then it would be rude to take a personal call, regardless of the language he spoke. But at that point we were just waiting awkwardly. I had no problem with him taking his call. I thought it was a sad commentary that he felt the need to explain that he would be speaking Spanish. It was a personal call, it wasn’t my business to understand his end of the conversation anyway. When he got off the phone I said we had come to a sad place if he needed to ask if it was okay to speak Spanish. He gave a small smile and another shrug.

During my 2 ½ hour drive and as I continue to think about my state of mind, I have come to a better understanding of what’s been going on. Not surprisingly, most of the issues are out of my control. I decided I need to focus on what I can do to manage it.

These are the strategies I came up with:

I hope that isn’t too ambitious. It doesn’t seem like it should be.  If you have suggestions, please share. I’ll report back.