When Leah called me back in January and asked if I wanted to do the 5 Boro Bike Tour, my answer was a definitive and excited yes. For those of you not familiar with it, this is a 40 mile bike ride through all five boroughs of New York City. I thought it was a great idea. I love biking – it is an awesome way to sightsee and get exercise. I would plan it and get to experience it with my daughter, we would build memories together. It was a full four months off so I could train for it and get in shape. All of which turned out to be true, except for that last one about the training.

Spring came very late to Albany, in fact we had a number of Spring snows, which made biking outside very difficult, if not impossible. I admit that I am a fair-weather bicyclist. I did up my walking/jogging routine. And when the weather finally permitted, I cleaned up my pretty red bike, Gary put air in the tires, and I took to the road. The longest ride I managed, though, was 14 miles. A paltry amount compared to the 40 the tour would require. But, I was determined and that would count for something.

As the date of the tour approached (it is not a race! all the promotional materials make a point of this, I think mostly for safety reasons), I found myself increasingly nervous. I had butterflies. Aside from the inadequate preparation, I was worried about a few things, in no particular order:

I think that about covers the sources of my anxiety. I was surprised by how nervous I was. Looking at the list of my concerns written out, I shouldn’t have been surprised.

Anyway, I plowed ahead and did it anyway, and I am so glad I did. Here are my thoughts and observations on taking a 40 mile bike ride through potholed streets and highways with my daughter:

What a day! I was pleasantly surprised that I could still walk. My 58 year old body didn’t fail me. I took a hot shower. Leah and I debriefed a bit with Dan, Beth and Gary. I shared a long hug with Leah before she got on the road. 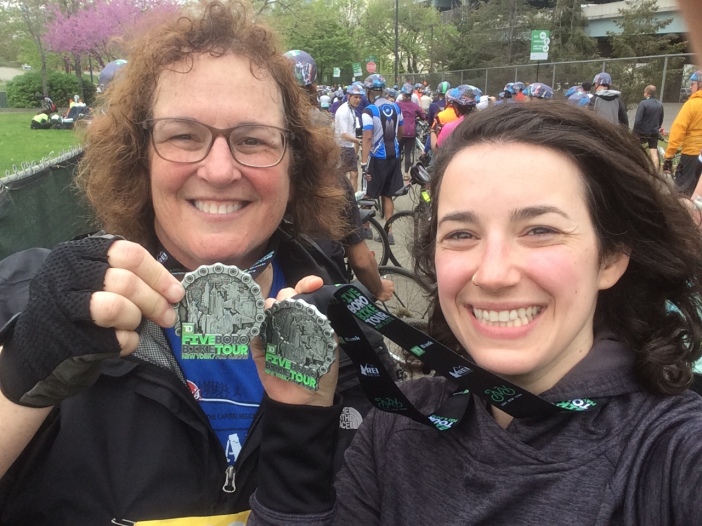 As I sit here writing this, I am not in agony – everything is a bit a sore, but certainly tolerable. I will carry great memories, and, as always, great appreciation for my family. Their encouragement and pride are a constant source of strength and joy.