On Saturday Gary and I met friends and went to Dia, an art museum in Beacon, New York, in the Hudson Valley. The building was repurposed, it had been a box factory for Nabisco. It featured large spaces that housed huge installations – sculptures, paintings, arrangements of stuff. We were told it was 30,000 square feet. We took a guided, one-hour tour.

The docent introduced herself, offered some history of the building and explained that she was an artist. Gary whispered to me, “Duh!!” From her theatrical manner to her inability to remember dates to the words she used to describe the art, she was what you think of when you imagine an ‘artist’ – creative and airy.

We were a small tour group. As we gathered to begin one gentleman coughed, a phlegmy, worrisome sound. Everyone took a step back and looked at each other. Coronavirus was on all our minds, but we were not deterred. During our visit we stopped once to wash hands at the restroom and later Gary passed around his travel sized bottle of Purell.

The first installation we looked at consisted of numbers painted on the walls of the gallery with a straight red line connecting them. The line and numbers were above my eye-level (I’m 5’6”). The docent explained that the numbers corresponded to the measurement of the space and the height of the line was the eye-level of the artist. She talked about it as a blueprint brought to life, bringing our awareness to the structure in which we stood. I thought it was interesting and gave me food for thought. I caught two of my companions rolling their eyes – they were not enthralled. Another person on the tour was moved to point out that the space wasn’t made up of perfect squares – the measurements across from each other weren’t exactly the same. The docent and that person engaged in some discussion. I was getting less interested by the second. Finally, we moved on.

The second room, see picture below, was comprised of a white dust arrangement on the wood floor. We were asked what we thought the substance was – we took some guesses. It was chalk. I liked the look of it – the wave-like pattern. Gary found this more interesting than the last room, but not by much. 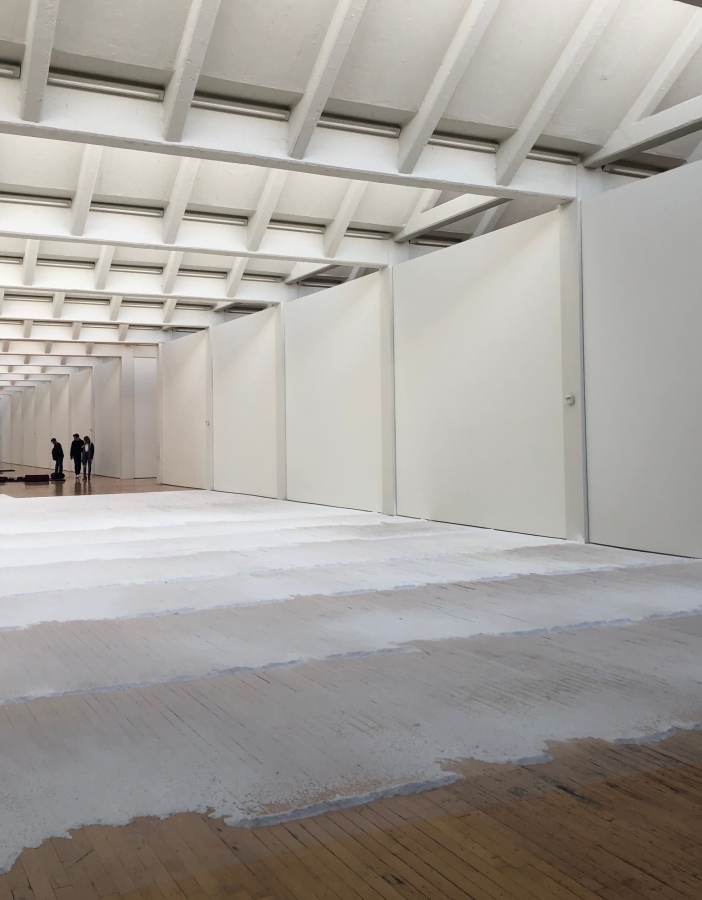 We continued walking through galleries. We came upon rusted structures designed for people to walk through and another area with free-standing discarded car parts, and a space with colorful fluorescent lights. We went outside to a garden where there was a soundscape – an artist had manipulated bird calls. The docent explained that the artist, a woman, was commenting on the fact that, other than her, when the museum opened all the exhibits were made by male artists. The sounds were the names of those male artists, distorted through a computer. If I hadn’t been provided that background information, it would have sounded like random noises. It wasn’t unpleasant, but I wasn’t sure it added to the experience either. Instead, I noticed that there were buds on the cherry blossom trees. A welcome sign of Spring.

After the tour, our foursome continued exploring the museum.

After about another half-hour, we agreed it was time to move on. One of my companions commented that the art had not moved him – he said he didn’t get it. Gary agreed. I was asked what I thought. I explained that I didn’t know if I ‘got it,’ but I enjoyed a lot of it. Some things amused me, in other pieces I liked the play of light, shadow and reflection. Without the docent’s explanation, I found some pieces pleasing even if I didn’t understand the artist’s intent, while others didn’t do anything for me.

Here are samples of pieces I found interesting (I didn’t take photos of those that I didn’t, which made sense in the moment but as I wrote this post I realized might have been useful to contrast. Of course I probably would have felt bad posting an artist’s work that I didn’t like.)

It is interesting to me how my taste in art has evolved over time. When I was a teenager and young adult the art I appreciated were Impressionist paintings, like Monet’s Water Lilies or realistic depictions, like Andrew Wyeth’s. I was mostly interested in ‘pretty’ landscapes. I still like Monet and Wyeth, but my appreciation for other things has grown. Now I see nuance, depth and skill in a portrait – I especially like John Singer Sargent. I can also enjoy an abstract arrangement of colors that simply pleases my eye. I enjoy outdoor sculpture gardens, especially whimsical pieces.

Art is clearly in the eye of the beholder. For two of my companions yesterday, there wasn’t much art to behold. They enjoyed the light and wide-open spaces of the building, and the scenic views of the Hudson River but didn’t get much from the pieces displayed inside. They were good sports about it, and we had plenty of laughs (especially at the phallic sculptures – which I did not photograph :)).  Our visit was a success. But, it begs the age-old question: what is art?