Gary and I are creatures of habit. Maybe most people are, I suppose, but we have our routines and we don’t often move outside our comfort zone. This extends to travel. Typically, when we are going to be away from home, I search the Marriott website for the nearest, least expensive property and book it. We like the reliability and predictability of it. We have only used airbnb (actually it was a different site, but the same idea) once and that was because we were traveling with friends and they found the property. It worked out fine, but we still didn’t feel comfortable planning our travel using it.

With this trip to the Canadian Maritimes (which refers to the provinces on the east coast – Nova Scotia, New Brunswick, Prince Edward Island, Newfoundland and Labrador), we took a step away from our usual tactic. It may have been possible to travel using only Marriott or Hilton brand hotels, but the places we were interested in didn’t seem to offer them. I still didn’t take the home-sharing approach, instead I booked bed and breakfasts that I found through Google and TripAdvisor. This may not sound that adventurous, but it was for us!

I researched various websites to plan where we would go and mapped out a route. We knew we would drive. Albany, New York (where we live) has a nice, small airport, but you can’t fly direct to many places. To fly to Halifax (the capital of Nova Scotia) would have us going first to Philadelphia or Newark. It would end up taking as much time as driving. Besides, Gary and I like road trips. Once that was established, I looked for accommodations. Bed and breakfasts abound in the places we were going. I looked at reviews and amenities (Gary MUST have wi-fi!) and made reservations. While I like the idea of B&Bs and have stayed in them a few times over the years, I did have some trepidation.

Regular readers of this blog know that I am not the most social person. I have written before about different approaches to travel (and not just travel, it could be waiting in line in a store). I am not inclined to initiate conversation. I’m not unfriendly, at least I don’t think I come off that way, but I’m just as happy reading my book or keeping to myself. Some of it comes from social anxiety, but some of it is just comfort with being quiet – at least in that setting.

Anyway, I thought staying in a B&B would force me to push myself…and it did.

The first place we stayed, Bailey House in Annapolis Royal, was an historic building, dating from around 1770.  The current proprietor decorated it with funky, brightly-colored art. Our room was lovely. There was one problem – the bed creaked. It was otherwise comfortable, but every time one of us turned over, we were reminded that the place was even older than us! The other parts of our stay more than made up for it. We were there for two nights and enjoyed a sumptuous breakfast with our fellow guests. Conversation flowed easily – some were American (from Sarasota and Atlanta), some from England and another couple from Halifax.

Some observations from our breakfast table:

None of the above would have been possible if we stayed at a Courtyard.

Each of the B&Bs we stayed in offered something different. In Lunenberg, the Sail Inn was also an old, historic building that was well located close to the waterfront and near shops and restaurants, and the bed didn’t creak! An Asian couple ran it, they spoke heavily accented English, and they had a young son who was very inquisitive. He noticed that Gary had engaged the emergency brake when we parked our car, and he wondered why. Gary explained. The boy followed up with a number of other questions. It was nice to spend time with a family.

We had breakfast that morning with a retired German couple who were finishing up their trip. We chatted about similarities and differences in our countries. They explained that when Germany reunited, some West Germans wouldn’t travel to what had been East Germany, thinking that there was nothing worth seeing. The couple thought that was foolish and shared what they had seen, recommending Dresden, should we ever visit.

The next B&B was located in a suburb of Halifax and was a modern home. The couple who hosted, Norma and Bill, were retired teachers. The room we stayed in reminded me of my parent’s bedroom in the house where I grew up. It had furniture that looked exactly like the Ethan Allen colonial style that Mom and Dad had, with the same drawer pulls. Norma and Bill’s bookcase was also crammed with history books, many familiar titles that sat on my Dad’s shelf, like Will and Ariel Durant’s The Lessons of History. I felt at home immediately. The hosts also took great pride in their garden, which was clearly lovingly tended. Unfortunately, we didn’t have enough time to truly enjoy it, but it added to the charm as we came and went.

Norma also offered helpful tips. When we mentioned that we were planning to go back to downtown Halifax to get dinner and listen to some live music, she suggested taking the ferry, rather than driving. The ferry made things much simpler and added to our experience. The weather was lovely for the ride across Halifax Harbour and we got to see the city from another angle. 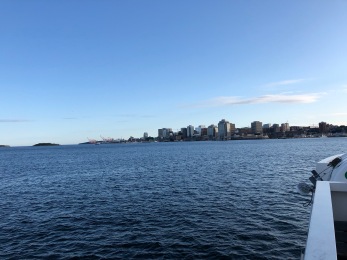 The view from the ferry as we approached Halifax

The next two places we stayed weren’t B&Bs, but were inns, the main difference being that they didn’t include breakfast. We stayed in Cheticamp on Cape Breton Island, just outside the national park (a breathtakingly beautiful place). The hosts at Cheticamp Outback Inn were also welcoming. They gave us a great orientation to the town, including a rundown of places to eat (there were only four or five options since it is a very small town!). Since they didn’t provide breakfast at the inn, we were pleasantly surprised when, on our first morning, there was a knock on our door and one of the hosts delivered two slices of homemade lemon loaf to tide us over until we went into town. Yum!

Our final stop was the Chipman Inn (Pratt House) in St. John, New Brunswick. It was located in the heart of downtown and did not have an onsite host. The building reminded me of a Brooklyn brownstone. The room was spacious and charming. We were two blocks from the waterfront, the sounds of live music and the cries of sea gulls added to the character of the place. Gary and I took a walk and found many restaurants and shops. I had not expected to find such a vibrant, hip neighborhood. 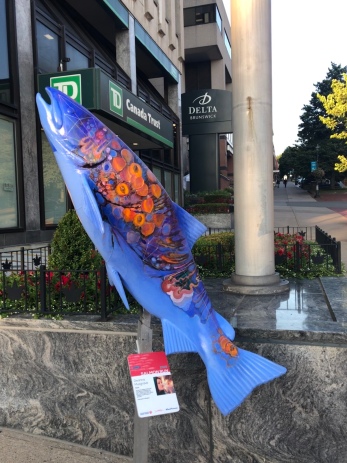 Two of the numerous painted salmon we found around St. John

Our trip to the Canadian maritime is now done, committed to memory. The scenery, the food, the history, the accommodations all exceeded our expectations. It also turns out that making conversation with strangers over breakfast can be fun, informative and enriching. We may have to reconsider our travel routine for our next trip. Bed and breakfasts may become the norm.

One preconception was confirmed: Canadians are very friendly.