I’ve been feeling unsettled and I think it’s connected to a book I just finished reading, Salt Houses by Hala Alyan. It is a novel about a Palestinian family that spans generations, beginning in 1948 through the present day. The author is a Palestinian woman, who according to her bio has lived in a number of different countries, including Kuwait, Jordan and the United States. The book provoked a lot of thought about identity, a subject I am endlessly interested in. 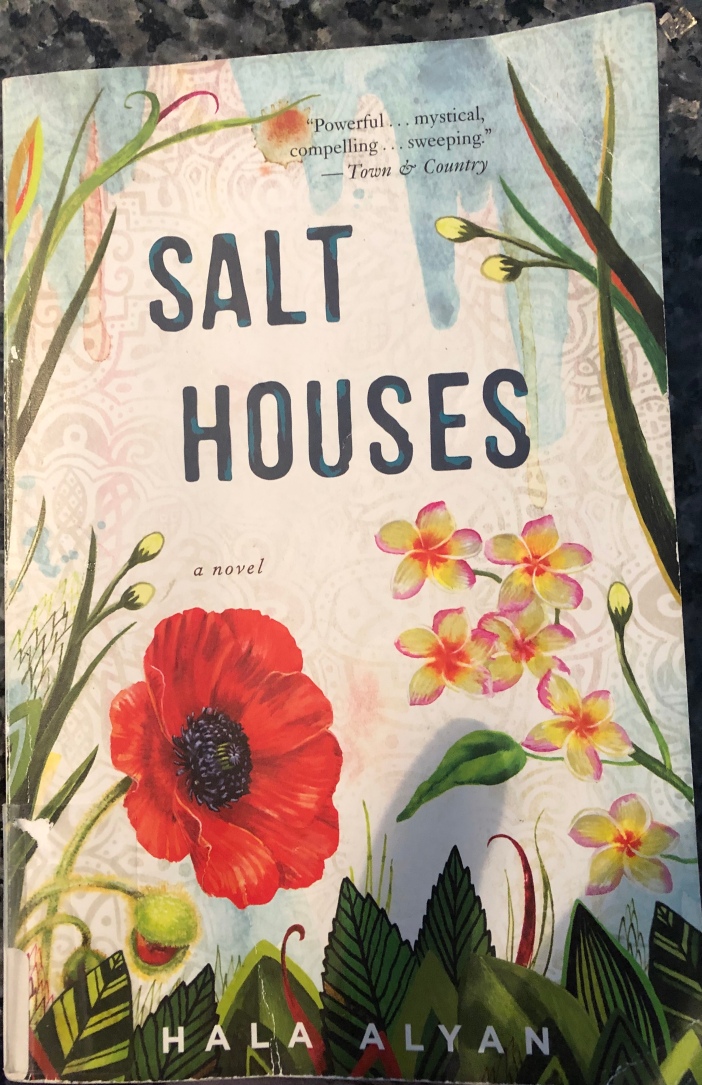 The family at the center of the story moves around the Middle East quite a bit – they had homes in Nablus, Kuwait City, Amman and Beirut. They also spent time in Paris and Boston. Their moves are most often the result of war, but sometimes it is in pursuit of opportunity or a different life. Some of the issues they face resonated with me. Many of the characters struggle to understand their identity. Is it tied to the land from which they are exiled? Is it their religion? Is it about language, food, and culture? And, if it is about all of these things, then what does it mean when you live in a country that speaks a different language, eats different foods, practices religion in a different way or not at all? How do you navigate the different values and customs, preserving your own but adapting to the society you live in?

These questions, these tensions, are very much at the heart of the Jewish-American experience. I was surprised to find that the themes that the book explores were so familiar. I find it ironic that there is so much commonality when the situation in the Middle East might lead us to believe that there is little common ground.

I have to admit that the book made for uncomfortable reading at times. The story begins with a Palestinian family in Jaffa being displaced from their beloved home on the Mediterranean by the 1948 war – the war for Israeli independence. The story takes as a given that the displacement was wrong, no context is offered. I understand why this is the case, both from the perspective of these characters and in the interest of telling the story. It is actually instructive to understand that this is the perspective. The “need” to establish Israel as a safe haven for Jews is not part of this narrative. I suspect this is true not just for this novel, but that it represents a widely held view.

In the book, as more is revealed, we learn that the family wasn’t just displaced, but was subjected to barbarous acts. Though it isn’t stated explicitly, it is clear that sexual violence was perpetrated by Israeli soldiers. This is a very painful chapter. I don’t doubt that Israeli soldiers, in 1948 and in subsequent actions, did horrible things. I don’t believe the author included this episode to be provocative, it must be rooted in real events. Every army since the beginning of time has been guilty of those crimes. That is not an excuse. No doubt when you have been the victim of such treatment your view of the ‘invaders’ is shaped by that forever. Whether instances of these crimes were more or less common in that war is not known to me. The question becomes, what do we do with that? History is full of pain and degradation being inflicted on oppressed peoples. How do we acknowledge that and, yet, move on?

There are parallels between the Jewish and Palestinian experience. Jews have been subjected to violence, cruelty and unspeakable acts of brutality. We have been exiled many times throughout history. Each year, at the Passover Seder, we tell the story of our enslavement and exodus from Egypt. I have always found great meaning in this ritual, reminding ourselves of our history and to not take freedom for granted. In our family, my in-laws are Holocaust survivors (I have written a number of blog posts about their experience), we tell their stories to the generations that follow. I believe it is essential that we do so. Anti-Semitism surely isn’t dead and we must be vigilant. There may be another side to it, though. In telling and retelling the story, do we keep the wounds fresh? Having heard these stories, do we approach the world defensively, ready to be attacked?

While reading this book, I thought about the story being told to generations of Palestinians. What is the message and what are the implications for relationships, with Jews, with Israelis, with the rest of the world?

In education, there is discussion about creating trauma-sensitive classrooms, in recognition that many students come to school bearing the burdens of traumatic life experiences. I wonder if there is a broader issue: how do we, as a society, deal with traumatized cultures (if there is such a thing)?

In Salt Houses, there are no Jews or Israelis who interact in any positive ways with the protagonists. I wondered if this reflected the fact that most Palestinians would not have occasion to have a positive interaction with a Jewish or Israeli person, or if this was just the particular story of these particular characters. If it is the experience of most Palestinians, then it is a sad commentary. The only interactions depicted in the book are those between the characters and Israeli soldiers and then an incident at airport security in Tel Aviv post 9/11. Suffice it to say, neither the soldiers nor the airport security officers come off well. It left me wondering if there are more ordinary opportunities for exchanges, not fraught because of the power imbalance or the pervasive fear of terrorism.

I purposely chose to read this novel to push myself out of my comfort zone. Authors from other cultures, who write stories informed by their experience, have much to tell us. It is easier to read those stories when the oppressors are generationally very distant or culturally unrelated to me. Salt Houses presented more of a challenge. This book is certainly not the full story. I can’t read one book by a Palestinian woman and think I have the full picture any more than I can read one by an African-American man and think I understand their broad and varied experiences. But, my understanding has been expanded. It was unsettling, but I believe it is worth the discomfort inherent in thinking about hard questions.