Dating was in the midst of a sea change in the 1970s. Women’s liberation was in full swing and a nascent gay rights movement was getting some traction. The upheaval may have contributed to some of my difficulties in establishing romantic relationships, as opposed to friendships, with guys. In my mother’s era, dating was pretty straight-forward. That it isn’t to say it didn’t have its challenges, but I think the process was kind of black and white. A boy liked a girl, he asked her out for a Friday or Saturday night. The boy put on nice slacks and a button-down shirt. The girl would likely put on a dress or skirt. The guy, if he had a car, would pick up the girl. If he didn’t, he still went to her house to get her. A girl might go out on dates with several different guys, until a couple became serious. I’m sure I’m simplifying, but it was simpler! (I’m not saying it was better.)

When I was in high school and in college a lot of socializing was done in groups, girls and guys could be friends.  Mostly we hung out in someone’s basement or at the diner, dressed very casually in t-shirts and jeans. If we went into the city (which meant going into Manhattan), we might put on nicer clothes, but we’d all meet at the subway station and travel together. Or, if someone had a car, we all piled in without regard to seat belts. The groups were co-ed. The relationship boundaries were fuzzy.

It was the beginning of a time where girls could take the lead, though that was not something I was ever comfortable with. It was also the beginning of a time where there was more awareness of options in sexual orientation. We had not yet reached the point that people came out as gay when I was in high school, but that began to happen when I was in college.

I found the whole scene difficult to navigate. I wasn’t adventurous, I didn’t know how to flirt and, while I was clear about my sexual orientation, I didn’t feel feminine. I had no confidence in myself as a feminine being. And, while some around me were adopting a more relaxed approach, sex was not a casual thing to me.

I offer this as background to my first ‘date’ with Gary. We embarked on a transition from friends who hung out as part of a larger group to something else, and I was bringing some baggage. He was, too.

It was September of 1979, the semester was a few weeks old, when Gary asked me out. He borrowed a car from a friend who lived on campus. Since we were going to Copperfield’s, a nice restaurant in Oakdale mall, we each got ‘dressed up.’ Gary was wearing slacks and a sweater, which was a major change from his usual wardrobe of a faded t-shirt and very worn in jeans. While I don’t remember what I wore, I wasn’t wearing overalls, which was my daily uniform.

There was some awkwardness in conversation as he drove us to the mall. Somehow the formality changed things, but we were doing okay. We were shown to a table. The waiter came by and asked if we wanted a drink. Gary immediately said no before I even had a chance to respond. The waiter went away. I was disappointed. I said, “It might be nice to get a drink.” Gary’s eyes opened wide. “It didn’t occur to me, I’m sorry.”

While I didn’t come from a family that drank much, it wasn’t unusual for my parents to have a cocktail when they went out to dinner. Apparently, that was not Gary’s experience. It was outside his ken. He motioned for the waiter to come back, I think I ordered a white russian.

We enjoyed our dinner, discussed our families and learned about each other. Then we drove to campus, returned the car and went to lecture hall number 2 where Foul Play, with Goldie Hawn and Chevy Chase, would be playing. A line was forming and we were close to the front.  After a minute or two, a curly-haired girl walked by to get on the line, but she stopped when she saw Gary. I did not recognize her. “Hi Gary!!” she said with enthusiasm. Gary said hi a bit tentatively, and turned to me and introduced me, “Linda, this is Cindy. Cindy this is Linda.” I recognized the name, if not the face. This was Gary’s ex-girlfriend. She was quite delighted to see him and find him close to the front of what was now a very long line.

“Gary, you look very nice,” she noted. “Do you mind if I join you?” Gary nodded his thanks in acknowledgment of the compliment. She may have taken it as permission to join us. She did. We all made some small talk, mostly I smiled. When we filed into the lecture hall, she sat between us! This was all very strange.

Fortunately, it was a very entertaining movie. I have always loved rom-coms (still do) – they are a great means of escape from reality. Goldie Hawn and Chevy Chase made a very likeable duo. The movie made me laugh and that was a relief from the uneasiness.

After the movie ended, we started to walk out and Cindy asked if we wanted to go out for a drink! She had a car; we could go get a drink and then she would drop us off at 30 Haendel. “It will save you from having to take the OCC (Off-Campus Community) bus,” she explained. I hoped Gary would say no, we had other plans. But, alas, he didn’t. “Okay,” said Gary.

Off we went to some bar, I have forgotten which one. We sat at a table and Cindy asked about various members of Gary’s family whom I had not yet heard of much less met, but she had. “How is Aunt Sophie?” she inquired. Cindy and Gary had been together for two years. One of the things Gary and I had bonded over was our similar relationship histories. Though his relationship with Cindy lasted two years, by his account it petered out, lost its momentum and died a kind of natural death, while mine involved more heartbreak (at least for me). Even with that knowledge, I certainly wasn’t expecting to share our first date with her.

Eventually, we finished our drinks and everyone decided not to get another (Hallelujah!). We went to her car. She drove us to 30 Haendel. We thanked her for the ride and started to go up the stairs. Neither one of us knew what to say, so at first there was silence. I think I broke it by asking, “What just happened?” We were on the landing of the third floor at this point. Gary was shifting his weight from foot to foot, looking down. “I’m really sorry,” he said. Then he said, “I kind of lost control of my nervous system. I didn’t know what to say or do. It was awful.” I looked at him, shaking my head, but feeling kind of sorry for him. “Okay, I guess,” I said. We agreed that we would talk about it the next day, rather try to figure it out right then and there. We said good night and went into our respective apartments. 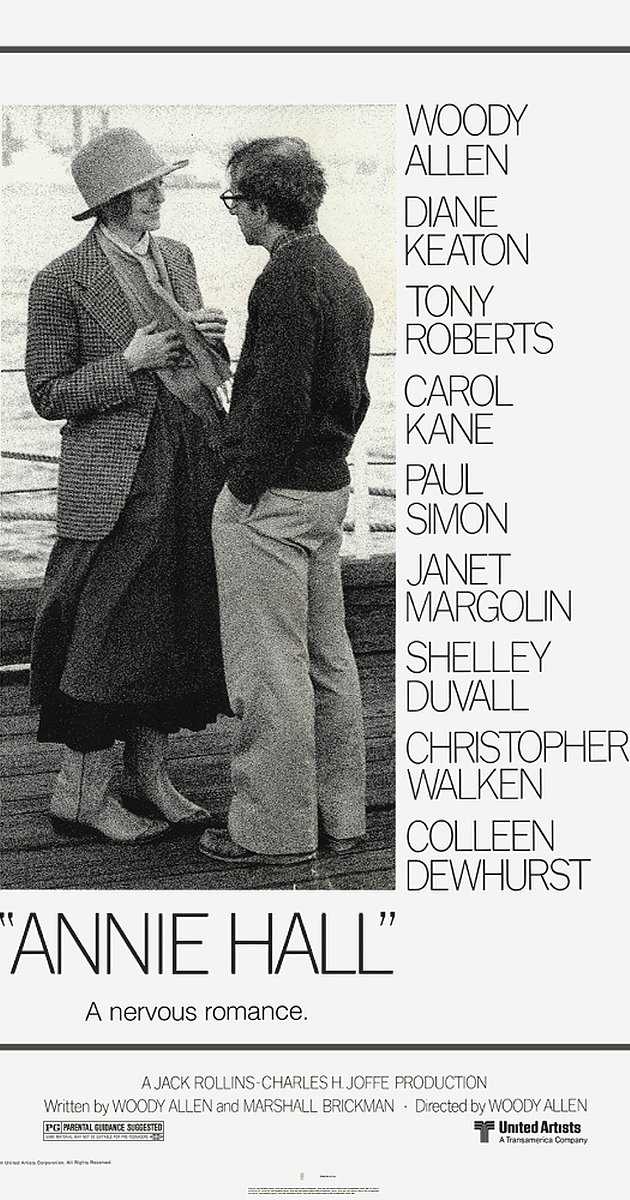 The next night, Sunday, Annie Hall was on television; this was before cable, it was going to be on ABC, a special event. I don’t remember how the plan got made, but Alison, Merle, Gary and his housemate, Glenn, and I gathered to watch it in the living room of our apartment. Annie Hall was one of my favorite movies of all time (it still is). Merle and I would quote lines from it to each other and we loved noticing all the little quirks, like the fact that Woody Allen and Tony Roberts call each other Max throughout, even though their names in the movie are Alvy and Rob.

We all watched the movie, laughing and chatting during the commercials. Gary and I had yet to discuss our date of the night before. As the credits started to roll, Gary and I volunteered to make a Dunkin’ Donuts run for everyone. Just as we were getting up to go, the phone rang. It was my ex! Annie Hall was a movie he and I had enjoyed together and, apparently, he watched it back in Brooklyn. We had a very brief conversation during which he said seeing the movie made him think of me. As he said that, I realized I had watched the entire thing without associating it with him! I had not consciously recognized, until that moment, that I had finally moved on.

Gary waited in the hall while I wrapped up the conversation. I joined him and we walked the few blocks to the Dunkin’ Donuts. We were finally ready to address the events of the night before. I don’t remember the details of our conversation, though I’m pretty sure I explained how difficult it had been for me to spend the evening with Cindy. I don’t think I was too hard on him, but I wasn’t letting him off too easy, either. We agreed to a do-over. We would try another date the following Saturday.

This time we went to a real movie theater, to see The Seduction of Joe Tynan, which I didn’t enjoy as much as Foul Play, but we didn’t run into or hear from any exes.

38 years later I see the seeds of important elements of our relationship in those first dates. We were honest with each other, we tried to understand one another, we were forgiving and we were friends. It stood us in good stead.

12 thoughts on “The First Date”