Zada was sitting at the huge mahogany dining room table in his suit and tie. I crossed the room and went to sit with him to wait for everyone else to be ready to leave.

I was wearing the same dress, brown with white polka dots, cinched at the waist, that I wore a month earlier to my grandparents’ 40th wedding anniversary party. That party, with its frivolity and craziness (there had been a belly dancer of all things) seemed ages ago.

Zada looked at me and said, “Nana would be so happy to see you looking so pretty,” and his voice broke; he made a strangled sound. His shoulders heaved as he sobbed. I didn’t know what to do. I had never seen a grown man cry. I stood up and ran back down the stairs to my bedroom with the sounds of his grief following me. I was eleven years old and I didn’t know how to comfort him or myself.

Two days before I awoke to the sound of Uncle Mike calling to my mom. “Feige, it’s mommy. She’s sick.” I heard his panicked voice in the hall outside my bedroom. Then I heard rustling sounds as my mom got out of bed, “I’m coming!” the slap of her slippers on the linoleum as she followed him upstairs. I pulled the covers over my head, trying to block out any more sounds.

I couldn’t help but hear the voices calling back and forth, the frantic phone calls being made; they were trying to decide if she needed to go to the hospital.

Despite my growing fear, I got out of bed and slowly climbed the stairs to see what was going on. I stepped into Nana’s kitchen and my Dad stopped me.

“Nana would not want you to see her like this,” he said.

I did and when it was ready I wanted to bring it to her, but an ambulance was just arriving. I put the cup down on the marble kitchen table and retreated to our apartment. When I heard movement on the steps, I went back out into the hallway to try and see Nana. I couldn’t see her face, just her wavy white hair as they carried her to the ambulance.

All the adults piled into cars and followed the ambulance, siren wailing. It got very quiet in the house. Mark, my 14 year old brother, an unbelievably heavy sleeper, had finally awoken in the tumult. I explained to him what was going on. Steven, my oldest brother, was away working at a hotel in the Poconos.

After what seemed an interminable amount of time, though it was still only early afternoon, we heard people at the door. My Dad came in.

“Come, sit with me,” Dad said. He ushered Mark and me to the couch in the living room.

He took a deep breath. “Nana died,” he said quietly.

Mark immediately burst into tears. How did he do that? How did he understand it so quickly. I was numb. Dad patted Mark’s shoulder and put his hand on mine. “It’s okay to cry.”

I don’t know if he said that for Mark’s benefit or mine. I’m sure he offered words of comfort but I don’t remember what they were.

I learned a lot over the course of the next week. I learned about sitting shiva – the Jewish ritual surrounding death. I watched the mirrors in the house get covered with sheets; Mom, her siblings and Zada each wore a black pin and ribbon to signify their loss; mourners used small hard stools instead of regular chairs. Each morning my uncles walked across the park to the nearest synagogue to say kadish. The house was filled with people, day and night; sometimes it felt like a party. Nana loved a party.

I learned that grown men do cry. Uncle Jack, Nana’s youngest brother, was sitting quietly one moment and then was overcome the next. I didn’t shed a tear, not then, not since. Nana was my comfort and heart, I felt a deep sadness, but tears would not come. It was my first experience with profound loss, but not my last. I learned that I don’t shed tears of grief and I still don’t understand why not. 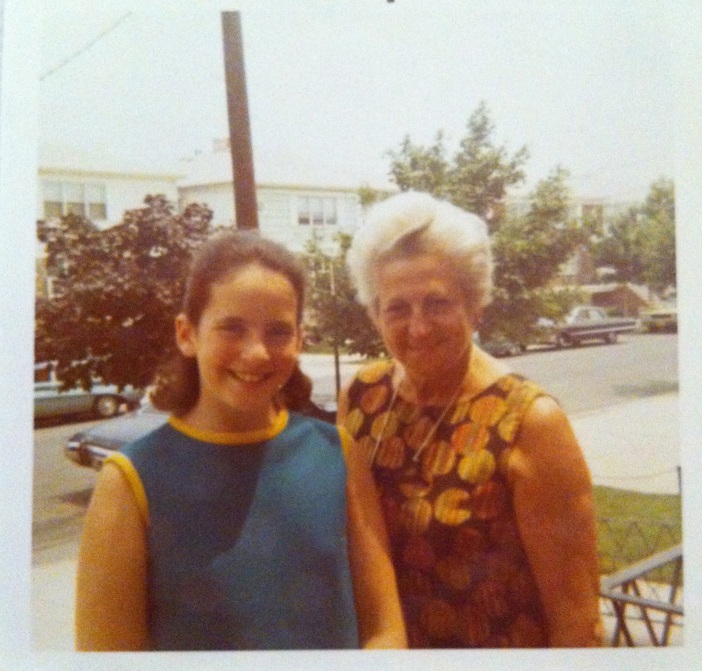