One of the things I have done during this period of quarantine is watch a variety of videos: music, movies, t.v. shows. Some are homemade that pop up on my Facebook or Twitter feed; others have been made available by professional artists or companies. All of them provide a welcome diversion. I received a link to one such performance from my daughter Leah. She knows I am a fan of the Alvin Ailey Dance troupe and they released Revelations, which was filmed at Lincoln Center in 2015, so that it could be viewed for free. [Note: The link she provided is no longer active. Apparently, Alvin Ailey has created a free All Access streaming service that rotates programming. Here is the link. Hopefully they will offer Revelations again. Their other works are well worth viewing, too.]

Watching the piece brought back memories. The first time I saw Alvin Ailey was in the early 1970s. It was a powerful experience

Aunt Clair, who I wrote about here, invited me to join her to see Alvin Ailey at City Center. I was excited. I was a fan of dance as an art form. During my teen years Mom and her sister (Aunt Simma) had a subscription to the New York City Ballet (NYCB). They took their daughters, me and my cousin Laurie, to three or four performances each season. The four of us would meet for lunch beforehand and then go watch the ballet. I loved those afternoons. Although I could not imagine myself as a dancer, I was moved by the athleticism, grace and strength displayed. Sometimes the music was even more beautiful than the choreography. Taken together, the music and dance were breathtaking. Some might find classical ballet boring, but it was rare for me to think the piece dragged. Most often I was captivated by the expressiveness of the human form – sometimes it told a story, but sometimes it was just raw emotion.

Alvin Ailey would be a different experience on several levels. We were going at night; not to a matinee. That meant being into the city after dark, which brought a different energy. Plus, it was the holiday season so Manhattan would be more lit up than usual. I didn’t know what to expect from the dance itself, but I did know that Alvin Ailey was not the classic approach offered by NYCB.

It also meant getting dressed for an evening at the theater and going into ‘the city.’ Though I lived in Brooklyn, which is in fact part of New York City, we didn’t think of it as the city. When we went to Manhattan, we said “We’re going to the city.”  I  also would be spending time with my Dad’s sister, my adventurous, independent and always interesting Aunt Clair.

Though I did not ordinarily focus on my wardrobe, this was an exception. For one thing, I was feeling a bit better about my body. For a brief time during high school, after having some success at Weight Watchers and staying quite active (I played basketball on my high school team), I was in reasonably good shape. Mom and I bought some clothes that I felt good in.

I chose my high-waisted, plaid, bell-bottom slacks. They were red and black with a thread of yellow, quite stylish at the time. I put on a black turtleneck sweater. I had to decide whether to tuck the top in or wear it out. I modeled for my mom and she suggested I go upstairs and ask Uncle Terry what he thought. Maybe Dad wasn’t home at the time. I was nervous as I climbed the stairs. Uncle Terry gave me a thumbs up for either way. If I tucked it in, I felt like it emphasized my chest. I wore the sweater out. Though I felt more comfortable in my body, I wasn’t ready to make that statement.

It was winter and holiday lights made the theater district even more festive than usual. I don’t recall how I got to the city – if Aunt Clair picked me up or if my Dad drove me in. I know I would not have taken the subway by myself. At that time, taking the LL in the evening alone was simply not an option – too dangerous.  Either way, Aunt Clair and I arrived at the theater and found our seats along with several thousand others. The theater was packed. Our seats were in the center in the lower balcony – perfect to see the whole stage, the dancers’ full bodies and the patterns they formed.

We saw three pieces: Blues Suite, Cry and, the finale, Revelations. I was enthralled by each one in turn. The program took us through the range of human emotion, from despair to joy, from anger to triumph. The audience was totally immersed in the ride. Revelations uses spirituals as its spine and the theater felt like what I imagine to be a revival meeting in a black church. Being a white, Jewish person, I had no point of reference for this, but I loved it. The heart of the dance was universal, showing us the human spirit in all its dimensions, but calling upon the specific experience of African-Americans. When the performance concluded, the audience, which represented a cross-section of New Yorkers, kept clapping, stomping and singing – even when the lights came up. No one wanted to leave, no one wanted to break the joyous spell. Eventually, after many minutes, people started to make their way toward the exits. Aunt Clair and I were exhilarated.

I have returned to see Alvin Ailey many times since. Though not all performances elicited the excitement of that first one, I have always been moved and grateful for the opportunity to see so much talent. I come away amazed at what the human form can communicate. Once we get through this period of social distancing, I can’t imagine a more perfect choice of performances to see than Revelations. If you have an opportunity to see it live, take it. 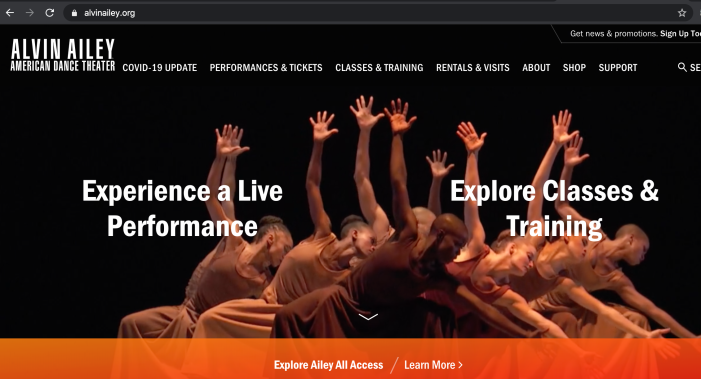 And, thank you, Aunt Clair for opening my eyes to what dance and theater could be.