Driving from Brooklyn to Champaign-Urbana, I was always the first in my family to know that a farm was nearby. I picked up the scent of cow manure miles away. Cow manure was in wide use as we drove Interstate 70 through the farmland of Ohio, Indiana and Illinois. To some, who perhaps grew up on a farm, that pungent aroma may have evoked warm feelings, reminders of Spring, the earth and beloved animals. For me, with my city sensibilities, it reminded me of the elephant enclosure at the Central Park zoo. I held my nose until I thought we passed it, or until I absolutely had to take a breath.

When I was early in my pregnancy with Leah, it was autumn. The smell of moldering leaves followed me around, I think the odor took up residence in my olfactory system. Years later, whenever I caught a whiff of rotting leaves, it reminded me of my pregnancy – a strange, perhaps unfortunate, association.

I enjoyed pleasant aromas, too. Freesia was a favorite flower. I loved Jovan Musk, the perfume, when I was in college. Baking chocolate chip cookies or roasting chicken were wonderful kitchen scents. Many childhood memories are infused with scents: suntan lotion at Belle Harbor Beach, mothballs in a cabin in Harriman State Park, the mountainous landfill next to my Canarsie home.

The first time I lost my sense of smell and taste was in 1989. Dan was 7 months old and Leah was just shy of two and a half. I took a leave from my doctoral program, first to give birth to Dan, and then extended it to go back to work full-time. Gary was in the third year of his internal medicine residency with two years of an endocrine fellowship still to come. He was paid for his efforts, but it was a paltry sum – certainly not enough for our family of four to live on. I had a graduate assistantship to attend the PhD program, but it wasn’t enough to cover our expenses.

A professor of mine, who knew I was looking for work, informed me about a job opportunity with the New York State Legislature. I applied and got the job; I started in late September of 1989. I reported for my first day of work with a heavy cold.

I was assigned my own cubicle, which made me slightly less self-conscious about the constant nose-blowing and hacking. I had been to the doctor and was already on an antibiotic. After another week or two with no improvement in the symptoms, I went back to the doctor. She prescribed a different antibiotic.

One afternoon I was sitting at my desk at work and I took some M&M’s as a snack. I put a couple in my mouth and realized I couldn’t taste it. I could feel them dissolving on my tongue, but I didn’t taste any sweetness or chocolately-goodness. I took a few more, just to be sure. Nothing! How disappointing! I didn’t think that much about it, though, attributing it to the severity of my congestion.

That night, as I was reading to Leah before bed, I noticed I was a little breathless. I couldn’t read aloud as fluidly as I usually did, needing to pause every few words to catch my breath. I pointed it out to Gary, who put his stethoscope to my lungs and heard me wheezing. I had never wheezed in my life. I went back to the doctor the next morning.

The doctor sent me for a chest x-ray and then I went back to work. A couple of hours later I got a phone call telling me I had pneumonia in both lungs. I asked the doctor if I needed to go home. The doctor said, “Yes! And, let’s schedule you to come back in tomorrow.”

When I visited the doctor the next day, she looked at me and suggested that I go to the hospital. “You clearly can’t get the rest you need at home. And, we should try IV (intravenous) antibiotics for a day or two.” I agreed. My family rallied to help take care of Leah and Daniel.

Between the bed rest, IV antibiotic and, an inhaler, I turned the corner. Over time, my tastebuds came back and so did my sense of smell. Both senses may have been dulled a bit, but not that noticeably.

When the kids were young it felt like I was constantly battling ear infections, sinusitis and/or bronchitis, though I never had pneumonia again. I had another episode of losing my sense of taste, but after a course of steroids, it came back. Over the years, I don’t know if it was related to the recurrent respiratory issues or not, my sense of smell diminished. Fortunately, once Leah and Dan were done with elementary school, I stopped getting those infections, but my sense of smell got left behind.

Today, I no longer perceive skunk! The odor must be unbelievably pungent for me to get even a whiff of it. Not a huge loss, it’s true. But, I can’t appreciate the scent of flowers either. Even sticking my nose into a rose, I only get a hint of the fragrance. It is so ironic, having been born with such a sensitive nose.

Earlier this Spring, walking in the woods with Gary, I sensed the freshness in the air, but not the sweetness. “Can you smell that?” he asked, as we hiked. “These white blossoms are really sweet.” I shrugged, “Nope.” We walked on. I appreciated the rich green carpet of ferns, the sun dappled leaves, the sound of the wind in the trees, the coolness of the shade. But, it felt a bit incomplete.

Yesterday Gary and I took a break from our car ride from New Jersey to Albany to check out the Walkway over the Hudson River. The walkway is a pedestrian bridge that links Highland and Poughkeepsie. 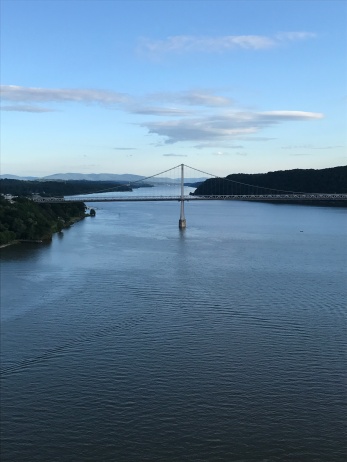 Gary a few steps ahead of me

It was still warm, though the sun was setting. The air had cleared after a morning of heavy, hazy humidity.  We enjoyed great views of the Hudson north and south. Heading back, with a neighborhood of Poughkeepsie beneath us, my nose registered something! “I smell barbecue! Smells good!” I said. “You can smell that?” Gary asked happily. We found the source, a family cooking out in their backyard.

My visual and olfactory systems may be flawed, but I’ll enjoy what I have for as long as I have them. I’m sure others struggle with compromised senses. Smell isn’t often mentioned; I think it deserves some attention.

5 thoughts on “An Imperfect Sense”